Authors! Want a review?
If you'd like me to review your work, please first: READ THIS POST BY CLICKING ON THESE WORDS RIGHT HERE.
It explains how my reviews are formatted and my genre choices, etc. Then, message me using the contact bar to the right.


Stevie is a soon-to-be mother. But that doesn't stop her from rocking out! As a popular blogger, she and her concert buddy frequent the local venue to see all the great shows. When Stevie's careful plan start on a tumultuous slide, she has to find a way to deal with her broken heart. Her whole life, music has been her companion, and once again she turns to it for solace.

Aaron McShane comes from a melting pot of a family. He's given up the rat race to open a vintage vinyl store with his best friend. Everyone thinks he's crazy that he works at an amphitheater during concerts as security for pleasure in his spare time. As the oldest son in a tight-knit extended family, he takes on a lot of responsibility which has taken a toll on his previous relationships. One look at Stevie at a concert, and he's dumbstruck by the redhead blooming with motherhood.

As Stevie works on picking up the pieces of her life, she and Aaron run across each other more and more. There's a sudden vacancy when her concert buddy goes on an extended trip, and Aaron is more than happy to step in. They have music in common, Aaron's family adores Stevie, and it seems as though they might have what it takes to have real love. The tenuous bond they've forged is suddenly tested by life's unexpected smack-downs and Stevie and Aaron have to decide if they can work through the storm together, or be torn apart by it.

Quick on the heels of her first release, R.L. Merrill's The Rock Season easily sidesteps the "Sophomore Slump" many authors fall into. This story runs the spectrum of emotion very well. From the first stirrings of attraction, to deep heartbreak, to fear and love - all are painted in the relationships of the main characters whether it be family or with each other. They are seamless and flow with the speed of real life.

Stevie is that quiet, tough soul that soldiers on. She isn't dreary, but her personal sadness is sharp and clear. Rather than telling the reader how much Stevie loves music, Merrill conveys it in her habits, her hobbies, and her dialogue.

Aaron is a big sweetie that only looks intimidating. He's a poet at heart, and a deep thinker. Fiercely devoted to his family, he feels especially responsible for his two younger brothers, who seem to find trouble quite easily.

The story is told in first person, switching back and forth between Stevie and Aaron. Merrill handles this well. Instead of causing the reader confusion, it allows for a deeper understanding of the main characters' feelings and actions. The plot covers a decent span of time, with the emphasis on the busiest time of year at the venue. Despite its length, it doesn't stagnate, but offers new peaks and valleys in the roller-coaster of the relationship.

If you love a hero with a sensitive soul and a heroine with enough strength to face down life's challenges, The Rock Season will become one of your favorites. I highly recommend this book for anyone that loves a good romance.

Posted by Ellay Branton at 9:26 PM No comments: 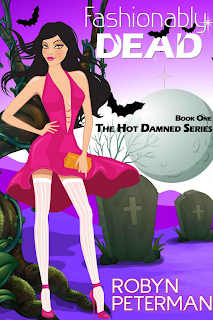 
The sparkling gem of this story is the irreverent and fearless humor. I swear on all things Prada, it will make you laugh out loud. I startled my dog several times while reading this book. She finally got so disgruntled she left the room.

Astrid is somewhat archetypal: She's a pretty but slightly dysfunctional woman with relationship issues and of course, a heart of gold. She's "not a ho-bag" but has a healthy sexuality. She doesn't know her own worth, has self-doubts, but soon realizes her place and finds inner strength. I could see that character development coming a mile away. Despite this, Peterman's ability to write a clear character voice is so strong, I was able to accept Astrid's at face value, and look forward to a deeper character development as the series progresses.

In the realm of the paranormal, so many things seem to have rules. Isn't that odd? It's supposed to be a world where the impossible is possible, and yet, so many paranormal novels are based on the same tropes and archetypes. While Astrid's beginning seems to follow those at first, and all of the plot twists were fairly obvious, Peterman does take refreshing liberties with many of those "rules". Astrid's genealogy allows for this with ease, which leads to smooth story progression.

The story moves along very well, there's no drudgery or drawn-out angst, which delighted me to no end. The only downside to that was, at times I felt rushed at points that could have used a bit of time to enhance their impact and importance. I'm somewhat befuddled by her very quick fall for her mate, despite barely spending time with him. I don't know if that was due to the "fated-ness" of their being together, or if it was just underdeveloped, or maybe due to length, it got cut. Even so, the book was over way before I was ready to leave the characters - and it had little to do with the "cliffhanger" ending.

To her credit, Peterman writes excellent supporting characters. Just like Astrid, they have clear and separate personalities, which helps the reader process a lot. Because the book moves so quickly, the reader is introduced to nearly 30 other characters. The writing is so good that you can pick them out in your brain to count them. They don't blur together and get lost or forgotten. Were this like other series, I'd love to explore their little worlds and characters separately.

As a first book, the world building and opened possibilities make it an instant appetizer for the rest of the series. I highly recommend it.
Posted by Ellay Branton at 9:47 PM No comments:

Review: Seductress: Women Who Ravished the World and Their Lost Art of Love by Betsy Prioleau

This book is my self-esteem bible.

The title suggests using one's sexuality to gain power. The book goes so much deeper than that, though.  Our femininity is the source of our strength, much as a man's physical build is his.  Rather than stifling this, and resorting to either Madonna or whore archetypes, Prioleau suggests we use the whole of our femininity, from our innate empathy to our resiliency. She cites neatly organized and well-researched examples of several different types of women: nonbeauties, seniors, intellectuals, artists, government leaders, and adventurers.  These women are all towering examples of self-possession, there's not a damsel in distress in sight.  Prioleau doesn't sugarcoat either, every mini biography gives a clear view of all of the subjects’ formidable strengths, but includes their myriad of failings.

SIDE NOTE:  Seductress is written with enough erudite diction to require even the most avid logophile (someone who loves words) keep a dictionary handy.

Repeatedly, Prioleau circles back to the ancient goddess(es) and how women in history have channeled them.  I'm not well-versed in matriarchal history or lore, and I was at first a bit of a cynic about this. Stepping out of the mental habits and opinions formed by my upbringing, and opening my mind to the ideas rather than the lore, allowed me to distill the underlying message from this book. If you have strong moral opinions, or a strict religious upbringing or belief that is hard-set, you're probably not going to like this book. The author crushes the double standards of men and women in power that go outside a monogamous relationship and lauds the women for using an intoxicating blend of mind, body and heart to get what they deserve. JFK, FDR...so many powerful men carried on a sordid affair (or several), but they're still venerated.  Women who do so are attacked and insulted.  Rather than mire herself in the debate around morality, Prioleau rises above it. She states the facts, and enumerates the effects.  Some have said that these women are master manipulators.  I find that’s only true in as much as every human being is a manipulator.  These aren't scheming social climbers or gold diggers.  These are women that knew what they wanted, what they needed, and suffered no bull to get it.

Regardless of upbringing, looks, age, original social standing or lack of money, these women rose to notoriety and gained the respect and adoration of their peers.  No matter who you are or what you look like, this book proves over and over the truth of the old cliche, "Looks aren't everything." If you lament that you're getting old, your face is plain, your pockets are empty, or your body is far from the ideal - READ THIS BOOK.  Instead of plaintively or aggressively wailing that society accept you as you are, you own who and what you are.  Society can hang itself.  Slights and barbs don't hurt so much because they are the weak arrows of the unfulfilled and the insecure.  Don't think this is a matter of just suddenly thinking you're self-possessed.  False bravado won't cut it, insecurity isn't hidden by sassy statements and a bitter attitude.  It can only be found by brutally assessing ones-self and staring into the parts both beautiful and hideous. Prioleau understands that, which is why her examples are so vivid. Of the thousands of women she researched, she mined the most formidable figures that impacted society and sometimes history - by fair means or foul.

Like many of the women Prioleau chose to spotlight in her book, the author has an awareness of self, a sharp mind, and understanding of the bisection of male and female society.  I guarantee just about every reader will disagree with the author at one point or another. I found that opened up the possibility of stimulating debates with others. Regardless of whether you agree or not, the intrinsic truths stand out.  Women, not just men, have hamstrung other women.  Feminism has gained us a more equal footing, but has managed to confuse and undercut men.  We don't need their power, we have our own. We don't need to wear men's suits, unless we want to. We don't need to harangue, nag, emasculate or subjugate men - it's alienating, and while it may gain power, it does not gain affection.  We need to assert our own minds and the strengths that complement theirs. We need to work beside and sometimes around them. We need to understand our needs - physical, emotional, and mental - and acquire satisfaction with the knowledge that it's deserved, without apology.  We must know our self-worth, our strengths, understand how others think, cultivate our minds constantly, and pursue all of our passions with unreserved joy. THIS is what makes an enchantress; that self-possession and savvy that spellbinds the people around us.
Posted by Ellay Branton at 3:18 PM No comments:

You can purchase my book on Amazon, Smashwords and its affiliates.

Would you like me to review your book? Do you want to ask me a question? Send me a message!